All these tunnels are being flooded by over a month of storms in the southwest. Walmart underground has miles of adrenochrome facilities and they even use Wally World to sell the children to other sick, satanic pedos.

Posted by Juicing and Raw Foods Sunboy at 2:21 AM
Email ThisBlogThis!Share to TwitterShare to FacebookShare to Pinterest
Labels: And the rains shall come to the world, Hundreds of miles of underground tunnels Southwest

Arson fires going out and the Rains Continue...

Arson fires going out and the Rains Continue

I love that each morning after a days' and night's rain, is a sunny sky filled with His Glorious presence. Google and every single search engine I could find, has completely blocked out any rain, weather, or storm images from being visible. It's like this biggest non-stop storm event in the history of the southwest - ever - and they are intentionally burying it from anyone who doesn't live in the southwest. Even if you live there, no one can seem to find a single storm picture of His Grandeur. And if you do, its some cheezy blacked out storm thingy with drizzle and no detail. Nothing of these glorious mornings He provides for the saints and the gentiles.

That's the control by the CIA over every aspect of our lives. If you cannot google a thing, it's not real. For most people, that is their truth. And the curse is upon the damned.

They hate that they've lost control and the narrative, which they were assured they had. If it were me, next demon session I would be demanding an answer of the lying whisperers of why their promises of total control and do what thou wilt, has come to nothing.

Every day, your powers are not increased, but DECREASED. Swallow that one. Enjoy the meal, Edomite. I am, in serving it up to you.

And the rains shall come to the world AV 19

And the rains shall come to the world

1When thou sittest to eat with a ruler, consider diligently what is before thee:

2And put a knife to thy throat, if thou be a man given to appetite.

(All dates and times, unless specifically stated otherwise, are from sunset to sunset, as it is in reality under the times set forth in the Torah by YHVH. All passages from the Holy Word are by His hand, not mine. They never were, except one time, when I asked if I could pick a passage. DB)

On July 10th, 2022, after a launch from Vandenburg (that blew up in the sky over LA), the world was given a hint regarding the upcoming events in the sky, by using the smoke trail of a failed launch in which to do it. The image yields the Time Spirit Number of 37. 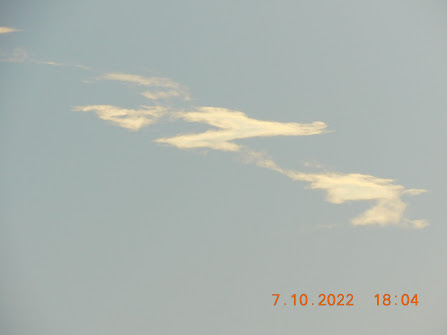 On July 19th, the rains prophecy against the climate hoax and intentional droughts deployed as a weapon against the people of the United States (for years and years) was given over. For one lunar cycle, 28 days, this proceeded apace, which achieved that “one month” and was of a time. A certain duration of confinement specifically between the border of the eastern Sierra Mountains in California to the Mississippi River and from mid Mexico to Wyoming as a zone of prophecy.

On August 15th, a plague of locusts and flies was announced, to be set in motion at noon on

So, yesterday on August 16th a plague was set in motion by myself, while the localized restriction of His control of the weather has completed its singular lunar cycle. Now, the prophecies regarding such can be anywhere, anytime, going forward. And so it is. Where there is drought, shall be rain. Where there are floods, the lands shall dry. Every effort at weather control as of yesterday sunset will be thwarted against them.

The satanic kingdom of loathsome low men have been controlling the weather for 70 years. No longer will this be and efforts toward such shall be turned against them.

And DUMBS are specifically targeted to be destroyed by the very thing the demonic nephilim believed they were safe from: His Righteous Judgments. The rains shall come where DUMBS be located, to make an end of them, forever.

And they that counsel climate change are cursed. They are that pass laws and blame their hoax on the people of Earth, are cursed. Their walks and ways shall be a stumbling to them, a comedy of errors, failures, and a mockery to the innocent and the saints. Everywhere. The weaving sky spiders that are chemtrail pilots also come under this judgment, for they have been poisoning the skies of the world since 1959. Military flights by Omega are under judgment; you may take off, you may land, but for how long? And every time you roll out to the flight line, you must ask yourself, is this the day I return not home?

The plague locusts and flies is set against the evil elite, known and unknown, their enclaves, where they run to and call home and those in whom evil has found a demonic expression. It is not set against the gentile, the innocent, nor the saints. Those whom believe they are untouchable will know not where nor when it will be their lot to face, but face it they will and once it touches them, it will henceforth be an anathema to their lives that is inescapable.

2God is jealous, and YHVH revengeth; YHVH revengeth, and is furious; YHVH will take vengeance on his adversaries, and he reserveth wrath for his enemies.

Today—the first day of the new lunar cycle since this all started—California started receiving rain west of the Sierra Mountains. The lakes and reservoirs west of the Sierras shall be filled. Should they leave the flood gates open to drain into the sea, as they are and have been doing for untold years, these men and women shall be struck down and their kith and kin fall under immediate judgment. So it is.

26 For by means of a whorish woman a man is brought to a piece of bread: and the adulteress will hunt for the precious life.

During this same time, I and others have continued to rebuke, bind and banish to the dry places, all demons in the main temples of the house of Mormon, as well as sealing it against further demonic incursion upon this plane. They are an evil satanic false doctrine “church.” This is ongoing. Much has been done, much remains. The demons will no longer come when called. The land upon which the temple sits has a curse against it, that ALL people are inured against it and the temple, finding no pleasure nor fulfillment at these places of evil, pretending to be of God when they are none. They are loathsome to the people, a place of rejection and annoyance. They are anathema to all. And so it is this day.

Turn to the Most High YHVH—seek out His Son Yeshua, for salvation. Every sincere heart shall be heard; He loves the repentant heart. He forgives much.

This is your chance to turn it all around and have a rudder with His hand on the tiller of your ship.

The world is filled with souls, human and angelic, as blessed by heaven

So, see what most have been missing, sleep walking through their lives. Banish and slay the demonic and evil, celebrate and enjoy the divine as blessed by Yeshua, Son of YHVH. For both exist here and this blog is an exploration to this obvious reality.

My other sites, your host